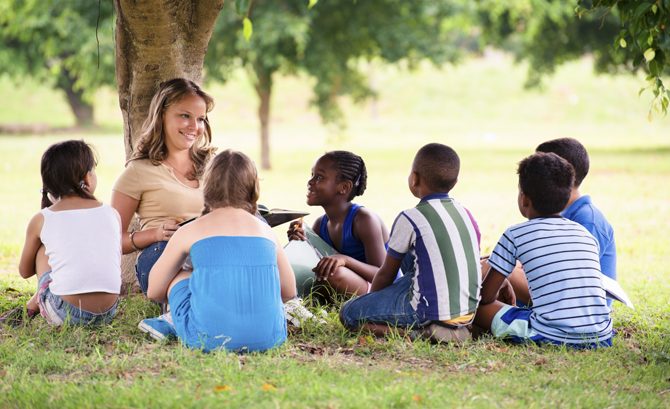 Too easily, the wonder of the gospel gets lost. Here’s how an 11-year-old at summer camp helped me find it again.

The summer camp season is here, and I’m busy teaching Bible lessons. Christian camps attract all sorts of kids. Some are the super-churched type sent to Bible camp to spend a week adding to their considerable knowledge. Others have seldom been in church; for them, camp is their first introduction to Jesus and the Bible.

It can be tricky to teach both types of kids at the same time, but I love having those who’re new to the gospel. I do have to be careful to be clear or they get confused. Sometimes I fail to provide enough background or explain terms, and they have trouble following. But many times they also have a heightened interest and amazement over what they hear. The gospel is fresh to them. They receive it with a wonder church kids have lost.

My first camp this summer consisted mostly of kids who had very little Bible exposure. They were interested and had many questions. A few may have been skeptical, but most seemed to eagerly take in all I said.

On the second day of camp I summarized the story of salvation. I told about creation and about sin and its effects. I told about Jesus, our desperately needed Savior. I recapped his birth, life, atoning death, and resurrection. I presented the need for faith in him and explained forgiveness, imputed righteousness, and life in the Spirit. I told how Jesus is now reigning from heaven and will return to end sin and death completely and to be with his people forever.

It was a good lesson, full of the gospel. I saw much amazement in those kids’ eyes as I taught it.

After I dismissed the group, one 11-year-old girl came up to ask me a question. I had noticed her during the lesson, because out of all the attentive faces in the crowd of kids, hers was the most expressive. She was the very picture of childlike belief, absorbing and pondering everything I said.

“I have a question,” she said.

I bent down so I could look her in the eye. “Of course. What is it?”

“What good will it do for us if Jesus comes back after we’re already dead?”

Silly me! I’d forgotten to mention that believers in Jesus will rise from the dead. It had been in my notes, but somehow I skipped over it while teaching. It’s one of those things that’s easy to forget because church kids know it without being told.

“Well, um…” I started to explain but stumbled. That girl was standing there looking at me so earnestly, and I suddenly realized I was about to tell her something she would either reject as utter nonsense or receive as the most stunningly beautiful news anyone had ever told her.

I spit it out. I looked her dead on and told her that she can live forever. One day she can be free from death, free from pain, free from sadness, free from evil and sin, living with Jesus.

Her eyes grew big with astonishment. “Wow! Really? No one ever told me before!”

I got ready to show her John 11 in the Bible, where Jesus says those who believe in him will never die, but she was already convinced and trotted off with a grin. As she left me, I noticed I was shaking.

Why was that? What I’d told her was no different from what I’ve said to hundreds of kids hundreds of times. But that time felt different because I had been hit with the enormous goodness of the message in a way that seldom happens. It usually glances off me, just like it does the church kids.

One of my constant goals is to present Jesus in fresh ways that will cause kids who’ve heard about him all their lives to see him with new, wonder-filled eyes. Much of the remaining camp season will be about that. But this also must be my goal for myself. I don’t know what will become of that girl I talked to; perhaps she went home to parents who told her my teaching was ridiculous. But I’m thankful that for a moment, face to face with a fifth grader, I was able to marvel at Jesus.