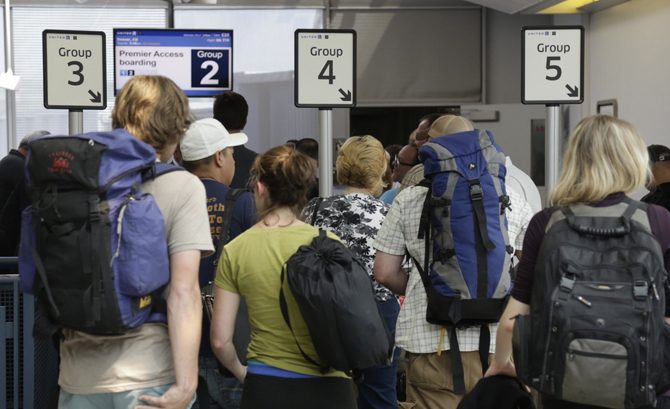 I and my fellow travelers are outwardly polite. But that doesn’t mean I’m not secretly scheming to be first—and too readily excusing it.

There may be no place in America where the urge to edge ourselves in front of others—without beings too obvious about it, of course—is more evident than at the airport. I’ve been flying this week for the holiday, with my wife and kids, and find myself wanting to be first again and again.

My son caught me at it the other day. We were in the final group to board our flight, at the gate with carry-on luggage in hand, and I was determined to avoid being among the last people on the plane. I watched the gate attendant carefully and when she reached for the microphone to announce, “Zone 4 may board at this time,” I started moving forward before she got the words out.

The rest of the family was supposed to be at my heels, but got stuck behind others who also surged toward the gate. I had all the boarding passes, and I wasn’t about to move out of my spot up front, so they had no choice but to elbow their way up to me. My son complained, “Dad, when you go that quickly you make us squeeze past other people!” I heard my wife explain that I have to get on board early enough to stow all my stuff in the overhead luggage bins before they fill up, since I’m a particularly tall person and I need the legroom space beneath the seat in front of me.

That isn’t really her excuse; it’s mine. I recognized it as the (true enough) reasoning I give to defend edging in front of others. I’m tall. I need more space.

Once on the plane, I spotted a precious gap in the overheard bin not far from our seats and quickly tossed in my carry-on items. Once my briefcase was assured of a spot, I unzipped it and pulled out the notebook I’d need to do some writing during the flight—being careful to keep the briefcase in the bin as I rummaged through it, lest the space be taken by someone else.

It’s not my fault that I have to behave this way. It’s the airline’s fault, with its wrongheaded luggage policies and insufficient bin space.

Later at the car rental center, I positioned myself to be first off the shuttle bus and in front at the rental counter. It was late, you see, and we have kids who needed to get to the hotel and go to bed. So my behavior was justified.

It always is. I always come up with some reason why I deserve to be first or have no choice but to be selfish.

And like I say, my kids have noticed my behavior. What am I teaching them? Surely, no amount of family devotional talks about being willing to take the low place will be able to counteract the learn-by-example teaching that I’m doing, unintentionally, at the airport.

Of all people, Christian believers actually have the best possible reasons for putting ourselves last and allowing others to go ahead of us. We have a Savior who specialized in giving up what was rightfully his in order to serve us, “taking on the form of a servant” and, “becoming obedient to the point of death, even death on the cross” (Philippians 2:7, 8). So we know what nobility there is in going last so that others can be first. On top of that, we have an inheritance. We can afford a life spent in second place, missing out on this or that, because we know our Father gives us all we need now and will one day share the world with us.

That’s what I need to be teaching my kids and training my own heart to believe. At the very least, I need to be honest with my kids about how I struggle with selfishness, and how it is my fault, and let them see my desire to repent. That is how they too will learn daily repentance, so I know it’s important. But it still won’t easy, especially at the airport.