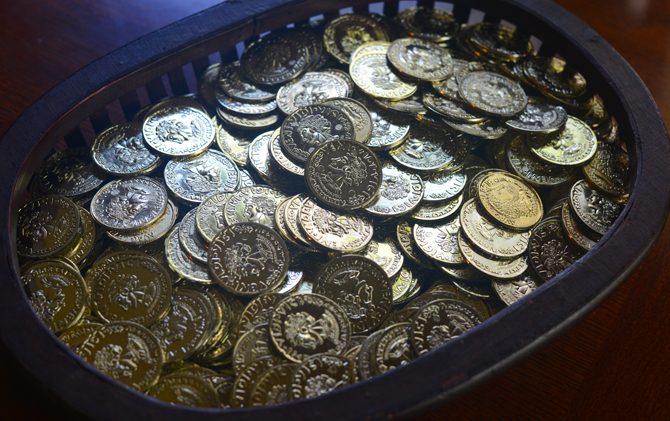 It’s a familiar lesson, I thought. Perfect for the kids. But it turns out that this lesson (about gold) may have even more to say to teachers.

On Sunday I taught about Naaman, the Syrian army commander who went to the prophet Elisha to be healed of leprosy. The story is a familiar one in children’s curricula, but I hadn’t taught it in years. This usually makes me feel a greater need to study it thoroughly beforehand, which is good for me.

An interesting thing happened when I studied this story: I ended up realizing that, sure, it’s a great lesson for kids, but there’s an even better lesson in it for teachers.

To understand what the Naaman story says to teachers, you have to know about the silver and gold. A sometimes-forgotten part of the story is the fact that Naaman arrived with his chariots full of riches so he could pay for his healing. When I taught the lesson I brought in a basket of play coins (you see it in the photo) as a prop to make the point. I explained to my students that Naaman actually brought thousands and thousands more coins than that, all real gold and silver! He was a very important person and he figured he had the means to get the prophet to help him.

But Elisha sent a lowly servant to instruct Naaman instead to wash in the Jordan River. The commander had to put aside the idea of paying his way as an important person, and humble himself by washing in a common stream. It was an act of simple faith.

After his healing, Naaman returned to pay for his now-clean skin, but Elisha refused. “As the Lord lives, before whom I stand, I will receive none” (2 Kings 2:16). It might seem odd not to take as much payment as possible from an enemy commander who’d probably looted from Israel in the past, so I discussed with the class why Elisha would be so adamant about refusing anything at all.

I explained how Jesus taught that Naaman’s salvation from leprosy was a preview of the salvation from sin that would one day extend to all nations (Luke 4:27). Naaman’s healing fit the gospel; it modelled how God saves. And that salvation is completely free. It comes by grace alone to humble people who receive it by faith. You don’t get it by being important. You don’t get it by being a good person (Naaman surely hadn’t been!). You cannot pay for it or earn it in any way.

Naaman seemed to learn that critical lesson. He stopped trying to pay and instead pledged to worship only God. He packed two loads of dirt to take home with him as his new worship ground. There may have been some theological confusion there, but it was a gospel response and Elisha gave his blessing. Naaman’s heart wanted to worship his Savior! As a prophet, Elisha had done good work. He’d demonstrated the gospel and Naaman got it.

And then it was ruined.

Elisha’s servant, Gehazi, thought Naaman got away too easily and decided to chase after him. Gehazi asked for a relatively small payment and the commander gladly gave it to him. When Gehazi returned, Elisha was furious and punished him severely. “Was this a time to accept money? … The leprosy of Naaman shall cling to you and your descendants forever!” (2 Kings 5:26–27).

This might seem like a cruel penalty for a little greed, so we talked about it in class. I asked, “Why was Elisha so strict? Why was it so bad for Gehazi to take some money?” One smart fourth grader said, “Now Naaman will think he has to pay to be saved after all.”

But isn’t this a mistake we teachers face every time we tell the gospel? We explain that God’s grace is free. We proclaim how Jesus paid with his blood the full price for our sin—a price we never could pay ourselves. Kids listen and believe this in all its joyous freedom. But then we notice some bit of repentance they should work on and we chase after them. We nag and scold and tell them what they must do.

Don’t get me wrong. I know there’s a sense in which following Jesus must cost everything. That’s worship, like Naaman’s load of dirt. It’s a sweet part of salvation, and so it’s good to encourage our students daily to serve nothing and no one but Jesus. But we must never give them so much as a hint that by doing so they have earned their clean souls. The debt they owe—for every last one of their thousands and thousands of sins—has been paid by their Savior. There is nothing to add.