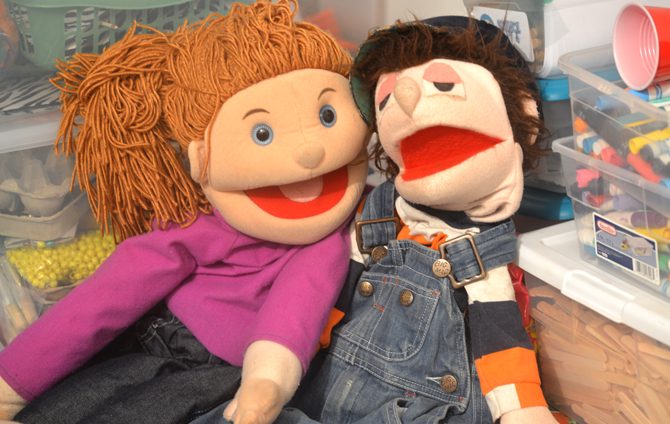 Can a puppet story explain the deeper aspects of the good news of Jesus? This one seemed to help.

With summer ended, I’m looking back on a season of teaching at Bible camps. This year, one of my favorite moments came from a way of explaining the gospel I hadn’t tried before. The kids at that camp were talking about it all week. And when something works like that (which is rare enough in kids’ ministry), I figure I ought to share it.

The kids at that camp were younger elementary students, five to eight years old. As part of one lesson, I wanted them to understand substitutionary atonement and imputed righteousness. Right there you can see the difficulty.

Those kids weren’t cognitively ready for abstract thinking, and those parts of the gospel can sound pretty abstract.

I explained those truths using those words, which is as straightforward as I know how to tell it. I could see that some kids were tracking but others looked confused.

With older kids, for teaching these concepts I have an object lesson readers of Show Them Jesus or What’s Up? will recognize: I show it to be like switching report cards with Jesus. But I figured the report card analogy would be too abstract for those younger kids, so I tried a more concrete visual aid. I took a large photo of the group and covered it with sticky notes on which were written “greed,” “lying,” “saying mean things,” and so on, plus some pictures of sins. I also had a poster with Jesus’s name which I covered with his good qualities like “telling the truth” and “putting others first.” Then I switched the sticky notes, showing how Jesus takes our sin and we get credit for his goodness.

That illustration has worked for me before, but this time I sensed many kids still didn’t understand. And even if they managed to follow it intellectually, it wasn’t making an emotional impact. By the end of that lesson, I was frustrated.

The next day I tried again, this time using puppets. From the camp supply room, I grabbed the two puppets you see in the photo. We’ll call them Marcie and Evan. I explained to the campers that I would tell a story about Marcie and Evan to help us understand what Jesus has done for us. I didn’t actually put on a puppet play; I just told my story and used the puppets to act out a few parts of it.

Here, then, is the story of Marcie and Evan.

Marcie and Evan and some other kids were invited to a birthday party. But Marcie wasn’t acting very nice at all.

Then it was game time. Marcie bragged about how good she was at the games. One game was a race, but Marcie didn’t play fairly. She pushed other kids to get ahead. She even knocked Evan down to win the race. Then she talked about how she was the best because she won. She called Evan a loser.

Next it was time for cake and ice cream. Evan helped the mom who was giving the party set out the plates and forks and spoons. Then he waited in the back of the line. But when Marcie saw there was cake and ice cream, she ran in, pushed Evan aside, squeezed past the other kids, and said, “Me first! I get to have cake first because I won the race!”

But the mom said, “Marcie, you’ve been behaving badly since you got here. Now you deserve a long time out. You need to sit on the steps outside for the rest of the party. You won’t get to play any more games, and you won’t get any cake and ice cream.”

Now Marcie was sad. She started going outside for her time out. The mom said, “Evan, you’ve been helpful and kind. You may be first to have cake and ice cream.”

But Evan said, “I want to take the time out that Marcie deserves, instead of her. I will sit outside on the steps and miss the party. I will take her place; let her take my place. She can stay at the party. She can be first to have cake and ice cream, too, instead of me.”

After I told that story, we talked about it. I explained how it’s something like what Jesus did for us—except that the sin we do is far worse than Marcie’s bad behavior, and the punishment we deserve that Jesus took for us on the cross is far worse than a time out at a party, and the good things that come to us from Jesus are far better than a party with cake and ice cream.

We talked about how experiencing Evan’s kindness might help Marcie to change her behavior. We also discussed how the actual gospel story is even better than my puppet story because it includes us receiving (1) God’s fatherly love and (2) power from the Holy Spirit to actually become more obedient people.

We even had a great discussion about why God would accept Jesus’s punishment-taking in our place, since most moms we know would never agree to let one kid serve a time out in place of another. What does God’s delight in one person taking the punishment for another tell us about his character? This turned out to be a fairly deep talk I ordinarily wouldn’t plan to have with younger kids, but one that helped them see God in a fresh way.

Mostly, the story was a concrete example of an innocent person taking another’s punishment, while the guilty one got credited with righteousness. That’s the main idea that stayed with those kids all week. I got a sense that their depth of gospel understanding grew, as did their appreciation for Jesus. That’s a good feeling.

I’ve repeated the story for you not just to share an idea you may want to adapt for your own use, but because we all need the reminder not to give up on teaching the gospel. Truth be told, I nearly gave up after my initial lesson went poorly. And when the idea of using the puppets occurred to me, my first thought was to dismiss it since I generally have a bad attitude toward puppet stories, having seen too many shallow ones in children’s ministry. But had I given in to either my frustration or my scorn for puppets, I would have missed out on the best teaching moment of that camp.